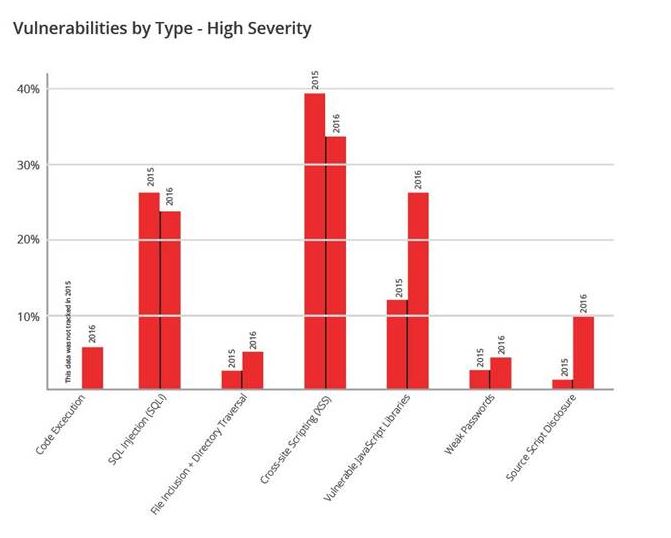 Vulnerabilities by type
Organisations are under intense pressure to deliver web apps and web services to meet the demands of modern digital customers. However, app security is not keeping pace with the development cycle, which broadens a brand’s threat surface. Therefore, today there are significantly more flaws for potential cyber attackers to exploit than 12 months ago.
Organisations need to be clear on what this means – a high-severity vulnerability could allow attackers to gain unauthorised access to data and systems, potentially to sensitive financial, customer, health data and trade secrets. They could also move to other systems to escalate the attack even further.
Chris Martin, General Manager at Acunetix, says: “Our research clearly shows high-severity web app flaws are on the rise and older vulnerabilities are still hanging around. Having a plan in place to prioritise these problems – and actually start tackling them – is critical. Using an automated vulnerability scanner such as Acunetix is the first step to protect your brand’s online real estate.”
Download the 2016 Web Application Security Report from: http://www.acunetix.com/acunetix-web-application-vulnerability-report-2016/

MFA Will Not Save the Insurance Industry