Barclays has launched a revolutionary biometric scanner which identifies a user by the blood and veins in their finger. 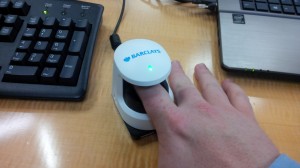 Developed with technology from Hitachi, the Barclays Biometric Reader allows a user to scan their finger to access their online bank accounts and authorise payments within seconds, without the need for PIN, passwords or authentication codes.

Initially offered to Barclays Corporate Banking clients from next year, Ashok Vaswani, CEO Barclays Personal and Corporate Banking, said that the near infra-red scanner was “simple but secure” as it captures a photographic view of the blood in your veins. “Fingerprinting is not enough, this is most distinguishable level of security and a great client experience,” he said.

“This is how we make lives easier, it is so simple that nothing really happens.”

Michael Mueller, managing director, head of cash management of Barclays Corporate Banking said that blood flow in a person’s finger is unique, more so than a fingerprint. He also confirmed that it is not storing biometric data and the information stays on the device. “We feel very confident that it is a very secure device and it is user friendly, when you upgrade security you introduce complexity – this does none of that. We believe that this is as simple as a click,” he said.

A spokesperson for Hitachi said that this device only stores a digital signature and biometric data on the device, and using it all a first – in ATM all we do is identify the user. Asked how safe that data was, he said it was built on SIM technology and international standards on security, and it is built according to protocol and to reverse engineer it “would take advanced technology and cracking AES codes”, which it said would be infeasible, if not impossible.

“This technology is well established in financial services and using this standard in a very secure environment, every transaction is created and authorised,” it said.

Barclays confirmed that this is currently only available for desktop, but it was confident that the technology would work in the mobile space. “Biometrics is the way to go in future and we are working on that, and customer feedback says they love it and on the corporate side we have this, so it is only a matter of time before we get this out more widely,” Mueller said.