by The Gurus
in Scam Of The Week 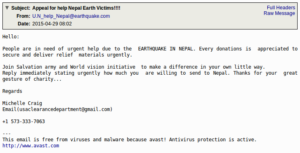 Jonathan French, security analyst, AppRiver said “We’ve been seeing a slow influx of messages mentioning the earthquake as an attention getter for normal spam. We’ve also seen customized 419 scam messages coming in claiming to be victims of the earthquake. The theme is similar to normal 419’s where they want you to help them with their large amounts of money, but specifically focused around recent events with the earthquake.”
French continued, “There was a small virus campaign that happened as well. It looks like the exe was having some issues though since it seemed to keep crashing shortly after starting. However I did see some keyboard hooking so it was most likely a small keylogger that would record keystrokes and send them off to a remote server.”
Users are reminded that whilst they shouldn’t ignore any emails asking for support or help, they should be mindful and aware of emails pertaining to recent events since that can be a major focus in spam campaigns.

Free HTTPS for all