Leading provider of cyber security solutions, Imperva, Inc. (NYSE: IMPV), today released its Q2 2015 Global DDoS Trends Report.
The report findings, based on over 3,000 mitigated DDoS attacks and 60 million blocked bot sessions across all sites which were protected using Imperva Incapsula, show a high frequency and long duration of DDoS attacks against organisations during the period from March 1 through May 7, 2015.
The report also details DDoS attacks that are beginning to resemble advanced persistent threats, evidenced by long durations, repetition and changing attack vectors aimed at evading simple, signature-based defence systems. At the other end of the spectrum, there is increased evidence that inexpensive botnet-for-hire services are being used to perpetrate attacks. With these tools costing as little as $19.99 per month, and available for online purchase using Bitcoin, the barrier to mounting attacks has dropped significantly.
Key report findings include:

“Compared to just a few years ago, the frequency, sophistication and duration of attacks have noticeably increased based on our findings in the Q2 2015 Global DDoS Trends Report,” said Marc Gaffan, general manager for the Incapsula service at Imperva. “Professional hackers are mounting advanced attacks that are now resembling advanced persistent threats. We believe that this increased sophistication is due to attackers studying how DDoS mitigation solutions detect and block attacks and implementing new techniques to attempt to bypass them. As a result, it’s important for enterprises of all sizes to understand the risks DDoS attacks pose and create a readiness plan.” 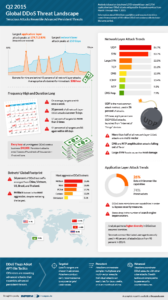 WhatsApp can be hijacked – keep an eye on your devices!

The Great Cyber Comparison: Anthropology of Modern Malware and Development of Civilizations: The First Signs of Weaponized Malware