451 Research, an information technology research and advisory company, has determined that cellular Internet of Things (IoT) and machine to machine (M2M) connections will increase nearly fourfold globally from 252 million in 2014 to 908 million in 2019. A monumental increase in active cellular IoT/M2M connections will be driven by a number of key factors.  First, hardware and bandwidth costs have dropped to a point where nearly every enterprise can reap the benefits of virtualizing the physical world. Second, cloud-based middleware and data platforms are making it easier to securely generate insights from machine data at greater scale than ever before possible.  Last, the buzz around this topic is generating overall awareness of the transformational potential of IoT/M2M in terms of ROI, competitiveness and support of completely new business models.  The building excitement about what is possible has generated a massive amount of M&A activity to support position taking for the next decade of IoT-driven business transformation.
The latest 451 Research data report shows that connected passenger vehicles and connected energy will pace the market in terms of connection volume while emerging solutions such as ‘pay as you drive’ insurance will grow the fastest.
“We continue to be bullish that ultimately the hype of IoT will be proven to be warranted back on business impact,” said Brian Partridge, Research Vice President. “Over the forecast period we expect that M2M/IoT solution suppliers will find fertile ground in vertical markets such as retail and government that will adopt IoT/M2M to enable strategic digitization strategies such as smart cities and the use of digital signage, mobile point of sale, and connected kiosks to drive the transformation from brick and mortar to ʻclick and mortarʼ.” 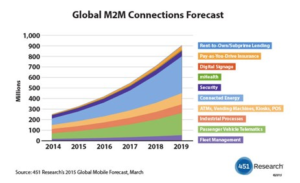 Also falling under the theme of IoT, 451 has also released a new long form report titled “Time for Work: Smart Watch App Development Turns to the Enterprise” authored by 451 Enterprise Mobility analysts Ryan Martin and Chris Hazelton.  Key findings  in the report, backed by recent 451 IT Decision Maker survey results, showed 39% of US IT decision-makers at companies that use or plan to use wearable technologies will deploy solutions in the next six months; 24% plan to deploy in the next 12 months. In addition, 81% of US IT decision-makers who say their company plans to deploy wearables in the next six months will favor smart watches.
“The release of Apple Watch has opened the flood gates governing wearables’ adoption,” said Ryan Martin, Analyst, IoT and Wearable Technologies. “But now that the river is running, it’s less about where it will end and more about where – and when – to start.  We expect wearable technology to deliver a key interface and input into the Industrial Internet of Things (IIoT). Wearables have the potential to become an interface – if not the interface – for IIoT access.”

Wi-Fi to Carry up to 60% of Mobile Data Traffic by 2019, finds Juniper Research