by Stephen Gates, Chief Security Evangelist with Corero
Criminals and cyber-criminals typically know no bounds, but there is an interesting trend to bring to light. Teenagers and college-aged students who have just been released from school for summer break have lots of available time on their hands; often with little supervision.  As a result, crimes committed by this age group always increases this time of year.
For example, just this past week one of the local news channels in Florida confirmed that crimes committed by this age group dramatically increases at the beginning of summer break.   Break-ins, thefts, vandalism, graffiti, and violence all worsen during the summer months and other times of the year when schools are not in session.   As physical crimes are escalating in every major city, cybercrimes not surprisingly are increasing as well.
In a 2014 report published by the Federal Bureau of Investigation (FBI) Internet Crime Complaint Center, there is a rather remarkable trend that emerges.  Internet crime complaints dramatically increase during certain times of the year.  Below is a graph from the report that demonstrates how many complaints were received by the FBI on a month-by-month basis.  As shown, several months of the year are accentuated from the others in terms of complaints being reported.  There is a clear increase in cyber complaints during the months where school is not typically in session. 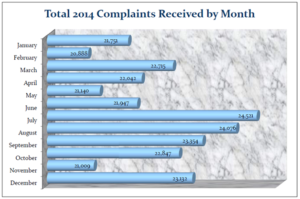 It is common knowledge that cybercrimes are easy to commit, are difficult to investigate, large numbers of them are completely unreported, and few people are charged and prosecuted for a cybercrime.  The tools used in cybercrime are easily available, anyone can learn how to use them, and they’re very effective.  Motivations for committing these crimes are often driven by financial gain but more likely for this age group – by notoriety.   This can become a toxic recipe – lots of time, effective tools, and dangerous motivations.  These attackers can certainly target confidentiality and integrity of data; however, today many of them are targeting availability.  Many in this age-group have become experts at launching DDoS attacks.  With “DDoS for Hire” services readily available, organizations have increasingly witnessed their operations falling into the cross-hairs of an attacker – especially during school breaks and summer vacations.

Expect an increase in DDoS attacks this time of year

These findings are reinforced by data provided by Corero Network Security, provider of real-time DDoS defense technology. DDoS attack trends and analysis derived from Corero’s protected service providers, hosting providers, online gaming and online enterprise customers across the globe are in alignment with the reported increase cybercrime during school breaks. Not surprisingly, online gaming organizations are hit the hardest with DDoS attacks and cyber threats during these periods of academic downtime. With additional free-time on their hands, students relishing in their break from homework, test preparation and the like, are spending more time participating in online gaming communities—and seeing what kind of damage they can cause with DDoS attack tools.
One example of data collected from an online gaming customer over the last five months indicates a tenfold increase in DDoS attacks in May 2015 as compared to February 2015. As school terms end, attack activity is on the rise, and as a result, organizations that do not have the proper defenses in place will be working overtime to protect their business from DDoS attacks this summer.

UK second most targeted nation behind America for Ransomware