It's Tax Time Again – and phishers are casting their lines

by The Gurus
in News

By Troy Gill, manager of security research at AppRiver

Self-employment in the UK is currently at its highest level since records began according the Office of National Statistics, with 4.6 million people working for themselves. Many are preparing to make a tax payment on account ahead of the 31 July deadline. And that means phishers are casting their lines in the hope to catch one or two.
The days before the deadline phishers will often try to spoof users into believing a reminder email to make a payment is legitimate. However, its after the deadline has passed that tends to see a flurry of activity as scammers send messages suggesting payments have failed, or that there has been a problem and additional information is needed for clarification.  Another regular scam seen circulating is the claim that an overpayment has been made and therefore a refund is due, with the recipient encouraged to input their bank details for the money to be returned. 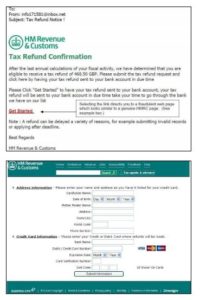 One example of a fraudulent e-mail. It contains a link which takes users to a deceptive web page that looks like it’s part of HMRC. (click to enlarge image)
Over the years we have seen hundreds of these tax-themed email campaigns, attempting to dupe users. The majority of messages contain malware as an attachment or use a URL that leads to a malicious payload.
So, what can you do to stay safe this tax season?

As HMRC increasingly encourages users to file their taxes electronically, and make payments via the online portal, scammers will try to capitalise on unsuspecting individuals. While paying taxes isn’t always popular, it is one of life’s certainties – that and dying. However, being swindled by fraudsters doesn’t have to be.

Russian Trojan on the move in East Europe