Cyber security firm Imperva has released a new behind-the-scenes report into the infamous CryptoWall 3.0 ransomware, which show just how much cybercrime pays.
CryptoWall is one of the most dangerous pieces of ransomware around today and it is estimated to have resulted in $325 million in damages.
While many reports and research publications go into great detail explaining the anatomy of different ransomware malware. Imperva’s report clearly demonstrates that peeling the layers behind the financial infrastructure of ransomware is achievable and such investigations could be a powerful tool if undertaken by the appropriate authorities. Imperva believes one of the reasons ransomware is thriving is the lack of action from law enforcement agencies.
Key findings from the report: 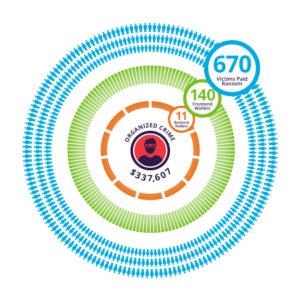 Commenting on the research, Mark James, security specialist at ESET, said: “Cryptowall or indeed any ransomware malware poses a very real threat to many computer users because of the potential damage to files that so many still fail to backup. Considering this is something that is so simple to defend against, it is still so widely used and often successfully.  The fact that it will adapt for the market area it is infecting shows that the malware writers do have an understanding of how important it is to tailor the ransom in an affordable way to ensure the biggest hit rate in gaining funds. “