Is the C-Suite Waking up to Security?

by The Gurus
in News

Dell Data Security Survey Finds that a Lack of Security Knowledge Limits Business Initiatives
The results are in from a survey of 1302 IT decision makers conducted by Dell which sought to shed light on the C-suite’s attitudes towards security, which has shown they’re most constrained by costs and time associated with security.
70% of respondents felt that security was a burden upon their time. At the same time, 73% of those surveyed are still concerned about malware and advanced persistent threats (APTs), with the same proportion beng kept up at night by spear-phishing attacks. Whether security operations need to run more smoothly in harmony with the rest of business operations, or if there’s a wider change in culture needed, these contradictions in concerns and means to mitigate them effectively within an organisation make evident that security hasn’t become an integrated part of the modern working culture for many. All in all, 69% of decision makers still view data security as a weight upon their time and budget. 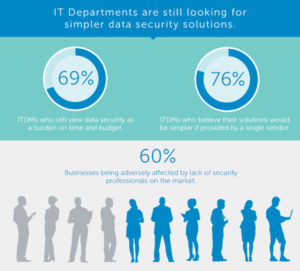 What’s more Dell uncovered that one in four decision makers don’t have confidence in their C-suite being adequately clued in regarding security issues.
Yet three in four say their C-suite plans to increase current security measures and more than half expect the amount spent to rise; however there’s a problem with this.
Throwing money at problems doesn’t make them go away. Obviously being well-financed in whatever you’re doing helps, however increased expenditure and security drives are wasted if there aren’t enough trained professionals in the industry – 58% of decisions makers said their organisation was adversely affected by the well-documented shortage in security professionals in the job market.
So to sum up, the C-suite is more invested in security than ever before, however there aren’t staff to fill the roles needed and organisations are still fearful of attacks and compromises as a result. What’ll happen over the next 12 months to change this is anyone’s guess, but hopefully processes will be streamlined and experts will be trained to deal with it!

Lessons from the cyber front line