The small mistakes that are putting your company data at risk

Small businesses can make common mistakes, which can result in company data leaks. Albie Attias, managing director of IT hardware suppliers King of Servers, explains.
As an IT professional, it can be difficult to gain the support of your colleagues and members of management when it comes to rolling out changes that will directly benefit the company – and introducing methods that will improve IT security is no exception. But the number of businesses that are failing to take the issue of data protection seriously is worrying, meaning many firms are unwittingly putting themselves at risk.
For small businesses in particular, the issue of data security is a tricky one – but should not be overlooked. Many smaller firms wrongly assume that they are not vulnerable to cyber attacks due to their size. However, this is exactly the reason why hackers and other malicious threats could be used against them.
We’ve outlined the signs you could be putting your security at risk below.
Outdated OS?
Research carried out by Spiceworks in 2015 revealed 66% of businesses were still using Windows XP, even though security patches were stopped earlier in the year. Failing to update an operating system can leave businesses open to outside threats.
Users of Vista only have until next year to upgrade their operating system before it becomes obsolete, so this should count as an urgent reminder that action needs to be taken. While the most recent operating system is not always an option, business owners need to ensure they are using one with available security updates.
No security audits
The belief that small businesses don’t need to take their data security seriously could not be further from the truth, and security audits are a vital aspect of data protection for any organisation. The one obstacle for SMEs is the cost of these, as small budgets can often put constraints on IT spending.
However, take some time to work out the potential cost of losses brought on by a data security breach, and you’ll soon realise the relatively low upfront payment for a security audit will definitely outweigh it. King of Servers has produced a guide on how to carry out an audit, to help business owners understand the benefits and how to implement one.
Lack of a firewall
Having a firewall means you have a protective barrier in place across your network, which closes any ports you are not using. Without this vital technology, these ports are left open, meaning outsiders could gain access to your data.
Firewalls are among the most important security methods available, and we’d recommend having one installed immediately, if you don’t already. As great as they are, a firewall is not enough to protect businesses from data leaks, and should always be used alongside other security measures.
Are you backing that up?
In the digital age, the amount of data businesses handle is continuing to reach new highs, as the internet and technology become an integral part of operations. Therefore, it is now more important than ever to backup this data.
Failure to protect data in this way is an accident waiting to happen, and this task should be carried out regularly to protect your data. Once an initial backup of the entire system has taken place, it is also necessary to set up automatic incremental backups, which store only what has been amended, or added to the system.
A lot to consider
Even the smallest business has a lot to consider when it comes to protecting themselves from outside threats, but the more seriously you take this issue, the less likely it is that a disaster is just around the corner. There are simple steps that can be taken to make your business less vulnerable to an attack, however, the benefits of paying for a security audit considerably outweigh the upfront cost, taking the responsibility off you and ensuring you get to focus on what matters. 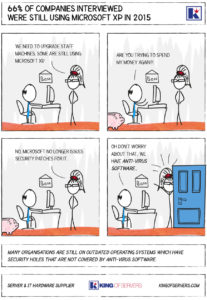 NSA wants to Exploit Internet of Things and Biomedical Devices