Understanding the threat from non-malware attacks

Every year seems to be “the year of” something in cybersecurity. For example, in 2013, it was “the year of the financial breach.” In 2014, the “year of the retail hack.” In 2015, we saw at shift to healthcare and, in 2016, ransomware reigned and even democracy came under fire.
2017 is already shaping its own theme. Research from prominent third parties, as well Carbon Black’s own research, indicates that 2017 may become “the year of non-malware attacks.”
Non-malware attacks have been in the news a lot recently but first let’s take a step back and understand what we’re up against and what can be done.
Defining “Non-Malware” Attacks
A non-malware attack is one in which an attacker uses existing software, allowed applications and authorised protocols to carry out malicious activities. Non-malware attacks are capable of gaining control of computers without downloading any malicious files, hence the name. Non-malware attacks are also referred to as fileless, memory-based or “living-off-the-land” attacks.
With non-malware attacks, an attacker is able to infiltrate, take control and carry out objectives by taking advantage of vulnerable software that a typical end user would leverage on a day-to-day basis (think web browsers or Office-suite applications). Attackers will also use the successful exploit to gain access to native operating system tools (think PowerShell or Windows Management Instrumentation – WMI) or other applications that grant the attacker a level of execution freedom.
These native tools grant users exceptional rights and privileges to carry out the most basic commands across a network that lead to valuable data.
Non-Malware Attack Example
Non-malware attacks leverage a robust suite of tactics and techniques to penetrate systems and steal data without using malware at all. They have grown in prevalence in recent years as attackers have developed ways to launch these attacks at large scale.
Let’s take a look at an example attack: 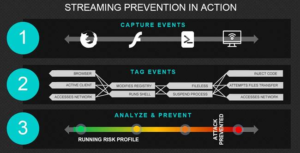 Sticking with the example above, browsing the web, running Flash and invoking PowerShell are each, in their own right, viable and necessary events, but what about when they appear as a cluster of events? It’s simply not normal behaviour and, as such, can be tagged, flagged and automatically shut down by streaming prevention before the attacker can carry out objectives.

PSD2 and the e-commerce system

Wow, did you see what happened to Veracode? Oh no, no, it's not dead. Worse – bought by CA