SPYSE team, a group of highly-skilled security specialists and IT experts of the area, has just released CertDB, which is an SSL Certificate search engine that could be used for the various purposes. The mission of the project lies in blurring the widespread belief that an SSL Certificate is just a minor collection of the data files that digitally bond the cryptographic key to the businesses’ details. On the opposite, the creators of CertDB aim to change the nature of things around the average users of the internet.

The importance of the SSL Certificates

It’s accepted that the SSL Certificate keeps the vulnerable data, such as passwords, debit/credit cards, and identification info encrypted so that only the intended recipient could comprehend it. Without the Certificate, the data could get intercepted and potentially used for blackmailing, identity theft, etc. At the same time, it’s clear that a website having an SSL Certificate has the higher rate of trustworthiness and attraction among the customers. All of these benefits are the ones that are obvious to the majority of the internet users. However, CertDB in its entity positions itself as the service that goes way beyond the expected.

The people behind CertDB claim their service to be among ones serving the educational purposes in the field of digital certificates. To this end, various companies, in theory, could exploit it for their benefit. For example, a company specializing in security breaches may use CertDB for researching the problematic certificates to weaken the possibility of the hacker attacks ultimately. Similarly, a service is a useful tool during the penetration tests; although, CertDB is probably not limited only to establishing the websites’ security. It can also be used profitably. As such, the commercial SSL-selling firm may increase its sales by “warning” the companies suffering from the affected subdomains and domains. 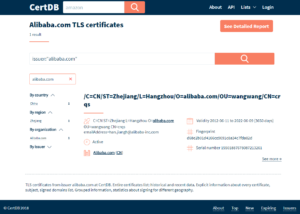 A reality check for the non-experts

CertDB is not a mechanism that is of use only to the professionals in the IT field. The service is also convenient for sticking your nose where it doesn’t belong. Consider, for instance, the large companies that spend an enormous effort and resources to remain free of the private data leaks. Fortunately, one can surely find such a type of the hidden information by taking advantage of the direct searching software of CertDB. A company’s newly-released SSL certificate, for example, could be used for gathering domains, subdomains, and IP addresses. Thus, such a data could help the owner to interpret in in the variety of ways.

The company of the focus may issue the certificate in an organization with the domains of other companies, which could mean the collaboration or purchase of one company by another. Such information could potentially generate profits as insight information or even lead to the start of the investigation (if there are indications of unfair business practices).

Another company could register the domain hinting the upcoming start of the initial coin offerings. This promising piece of evidence can help with the competitive analysis or business analytics among others. Besides, it gives the data owner an ability to gather funds for the potential investment.

The ideology behind the project

The creators of CertDB (SPYSE team) know that the internet develops with the rapid speed, which only intensifies the issues of data security and privacy concerns. To this end and with the aim of disclosing the hidden info to the public, CertDB keeps functioning for the needs of the average users who want to know more about the various companies and conglomerates. Even more so, the site allows for browsing an “outdated” data, as well as the new one, which really could change the way people look at the concept of data itself. Thanks to the efforts of SPYSE, the project has come to exist and is currently available to the public free of charge.