by The Gurus
in Editor's News, Events, News

Humanity has always embraced technology and, today, we are seeing increased IoT integration, cloud adoption and vast wave of remote workers who are connecting to more online infrastructures. However, this is leading many to question the cyber resiliency of organisations, particularly at a time when cyber-attacks are at an all-time high. In fact, according to respected engineer and technology author Peter Diamandis, “over the next ten years, we are going to see roughly 100 years of technological change.” 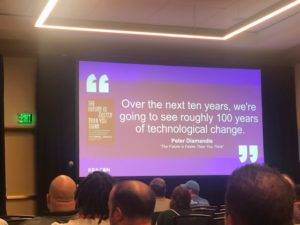 However, to understand this, the audience were walked through the previous three industrial revolutions (from the 1800s to present day) to see how each brought about changes that moulded society, from our technological innovations to our education habits which would define the generations that came after. 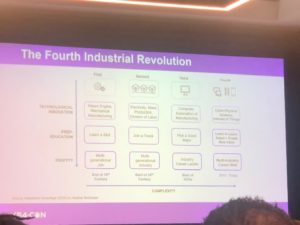 Lydia and James then explained how the fourth revolution has given birth to IoT, Automation, Machine Learning, Quantum, the Metaverse and cyber-physical systems. Human interaction with these technologies is growing because most things have become electrified or digitised.

These systems are even being found in our homes in the form of Siri, Alexa and Google Home. While they are designed to aid us when called upon, there are instances where such AI IoT devices are being creepily invasive by listening to our conversations.

Yes, there are issues to iron out but the convergence of technology, like AI, has benefited society in many ways, from healthcare to transportation.  Furthermore, the use of IoT devices is well documented within SCADA and Industrial environments as they help connect individuals to enterprises. The critical point though is human intervention will always be required to oversee these systems as the lack of security is becoming more apparent.

The talk then moved onto quantum technology, cryptocurrency and blockchain. Quantum computing is a hot topic with many nations and enterprises claiming to have reached quantum supremacy. However, both commented the fear that Quantum will have the ability to break encryption (using Qubits) and so building quantum resistant encryption must be a priority.

Furthermore, Lydia noted the rise in blockchain, cryptocurrency and NFT attacks. She stated that banks “are not as targeted and so threat actors are turning their attention to cryptocurrency because of the lack of security.” Indeed, in 2022 alone, a report found that users had lost crypto-assets worth over $700m in security breaches at exchanges and storage providers. This didn’t deter approximately 70% of the talk’s audience who raised their hands in stating they owned some form of cryptocurrency.

With the creation of these new technologies, building cyber resilient cultures will be the lynchpin in organisational and societal growth and security. Lydia explained how organisations needed to achieve cyber resiliency built through effective, open and clear technology communication channels. This includes adopting a mindset that allows the workforce to understand what malicious attackers think, and therefore build a culture, so it becomes second nature – akin to a red-teaming mindset. Have education be the foundation by following a security culture playbook which embeds security into the organisation’s culture, from top to bottom – this is the next evolution that must be taken as we enter the fourth technological revolution.

Ransoms only make up 15% of ransomware costs