Manipulation by Disinformation: How Elections are Swayed

In 2016, we witnessed as the Trump and Brexit campaigns leveraged the help of Cambridge Analytica to spread disinformation and sway voters in their favour. While Cambridge Analytica has since been dissolved, the threat of disinformation is ever-present. In many ways, it is a threat that arguably dates back to ancient times and what we see today is simply its amplification on a global scale.

We invited a number of special guests to compare and contrast how propaganda has evolved over the years, looking specifically into how social media has changed the game. Where Rupert Murdoch has had majority ownership of the media, has the advent of social media made electoral campaigns fairer by offering others a voice? Or has it, in fact, become an effective tool for manipulation? What about social media platforms as the gatekeepers? Is it their responsibility to fend off “fake news”? If not, whose responsibility is it?

With the world watching in anticipation as US citizens vote in their 46th president, this will no doubt be a fascinating and relevant conversation to listen in on. 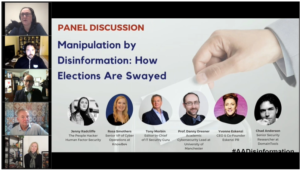 – Tony Morbin, editor of IT Security Guru and former editor of SC Magazine

Learn to Combat These Three Cybersecurity Monsters This Halloween and Beyond