The Difference Between Hashing and Encryption

by The Gurus
in Cloud Security

In recent years, the number of intruders has risen sharply. Cybercriminals use the latest technologies to take advantage of weak networks and wreak havoc with the data lying in the servers. In most cases, businesses are lax in ensuring proper systems to thwart such data breaches. It makes them the sitting ducks for hackers who are always looking for vulnerabilities in business networks. Hashing can be used to protect data.

There is a hacking incident every 39 seconds, and it costs businesses around US$ 3.86 million for every data breach. There are various ways to prevent a cyberattack. Companies can use different technologies to prevent a data breach. One of them is through encryption of messages being transferred. But what are they, and what is their use? We will discuss difference between hashing and encryption in more detail in this article.

The hashing process involves mapping keys and values into the hash table using a hash function. The hash code is usually used to create an index where the value is stored.

Hashing involves a one-way process where an algorithm takes the data and transforms it into a fixed length. It is a hash value, and the length that has been generated is usually smaller than the original string, though it can vary. Here is a details guide on how hashing algorithm works. 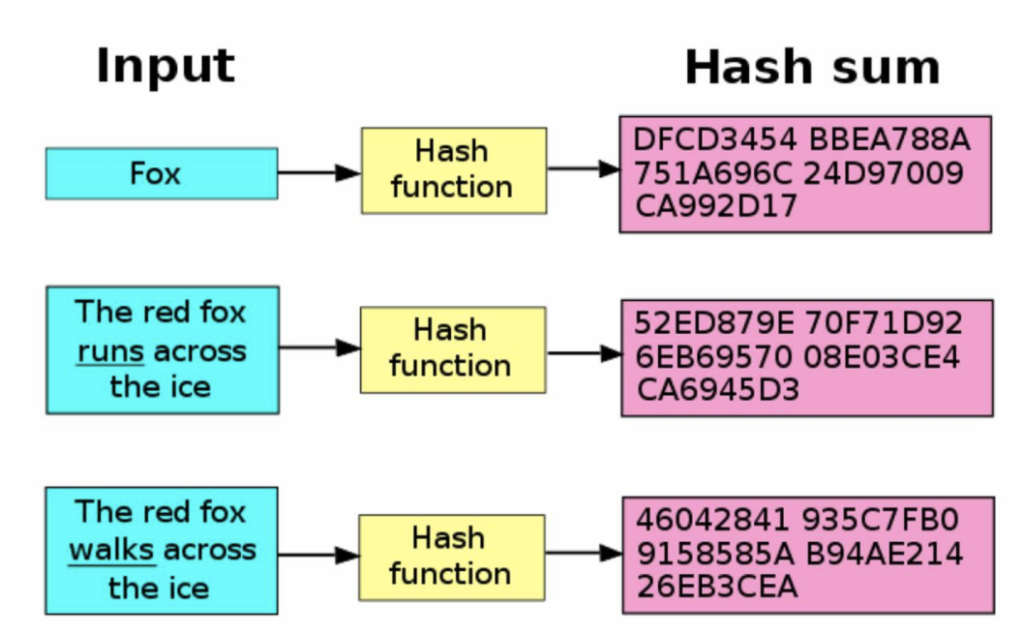 Hashing is used to store passwords securely, and no one can access the data. You can avoid duplication, and the algorithm can be used in digital certificates. You can also use hashing to find any specific data from the database.

Salting is a process that is used with the hashing of passwords. A unique value gets added to the password. It gives rise to a different hash value. Salting is used to store passwords. This concept prevents brute force attacks and adds a security layer to the hashing process. Always ensure that the salt for each password is different.

In the MD5 hash algorithm, you take the string and encode it into a 128-bit output. The MD5 hashes are usually used with a small string. It can also be used to hash data in databases. The algorithm checks whether two sets of data are identical by having a checksum of both sets and then comparing the checksums. However, it is not used now due to vulnerabilities associated with it.

The Secure Hashing Algorithm (SHA) is a family of six hashing functions. They can take a string of variable length as input and turn them into a fixed-length output. For example, the SHA 0, SHA 1, SHA 224 and SHA 256 operate on a 512-bit message that is divided into blocks of 32 bits each. The SHA 384 and SHA 512 work on 1024-bit blocks divided into 64 bits each.

Encryption is when a communication message is converted into a secret text that hides the meaning of the information. This encrypted piece of information is called the ciphertext. The process allows the information exchanged with the webserver to be protected from being subject to a data breach. The asymmetric encryption methodology is known as the public-key encryption that is commonly used.

Encryption involves scrambling of the message that can be read only by the authorized set of entities. The process involves converting plain text into random data. The method uses cryptographic keys, a set of values agreed by the sender and the receiver. The data is encrypted before transmitting and is decrypted by the intended recipient.

The key elements of encryption are:

Encryption also helps by tracking the source of the data that gets leaked in some way. As the origin can be traced, it helps in the authentication of the messages. The messages can be read only by using the requisite keys by the intended entities.

It is usually used in wireless security, file encryption, cheap SSL certificates, etc. It replaced the earlier DES technology as the encryption keys can go up to 256 bits. Several entities use this encryption standard to protect sensitive information. It is considered safe, and it would take a long time to decipher and crack this mechanism.

RSA (or Rivest-Shamir-Adleman named after its creators) –

This involves the factorization of larger integers. The public key has two numbers, and one of them is the product of multiplication between two large prime numbers. The private key is taken from the same two prime numbers. The RSA keys are usually 1024 or 2048 bits in length.

The difference between hashing and encryption

There has been a severe increase in the number of successful data breaches across businesses of all sizes. As a result, it becomes necessary to adopt adequate security procedures to prevent these attacks. You can prevent these attacks by encrypting the messages that you wish to transfer. It encodes the message to ensure the confidentiality of the underlying information. As a result, only the designated recipient can decipher the information.

The other procedure you can utilize is hashing. Mapping of the data size of any length to a fixed length. It is a one-way function, and it is technically infeasible to reverse the hashed message. Nevertheless, they are both ideal in handling data security. Future enhancements are underway to provide more teeth against possible cyberattacks.

MFA Will Not Save the Insurance Industry